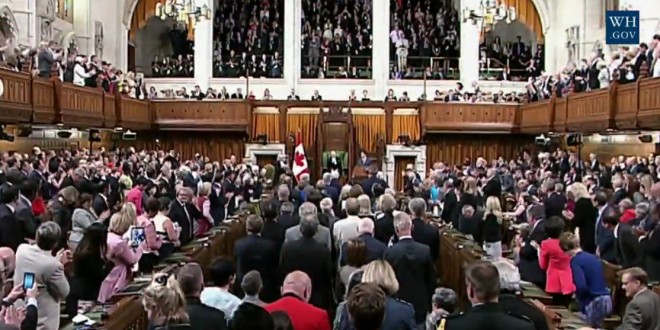 Canada’s Parliament broke into chants of “four more years” as President Barack Obama wrapped up the first address there by a U.S. leader since 1995. Four years for Obama amounts to wishful thinking. He’s nearing the end of his second term in office and speaks fondly of life after the presidency. His term ends in mid-January 2017. The U.S. Constitution bars him from running for a third term. Canada’s lawmakers also greeted Obama, who is popular in Canada, with a rousing standing ovation after he arrived in the House of Commons. The reception prompted Obama to joke that the “extraordinary welcome” tempted him to just “shut up and leave.” He spoke for nearly an hour.

The president’s full address is in the second clip below.

Previous Skittles Gave Up Their Rainbow For Pride [VIDEO]
Next Justin Trudeau, Superhero