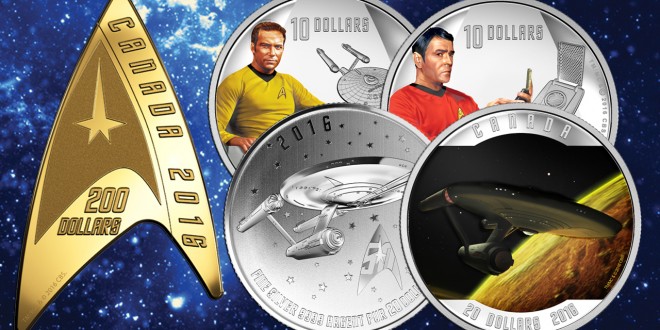 The Canadian Mint has announced its plans to celebrate the 50th anniversary of Star Trek by releasing a line of coins that can actually be used in financial transactions…if you were so inclined. Some of them are even reasonably priced. The $10 colored coins featuring Kirk, Spock, Uhura, and Scotty are only being sold for slightly over the face value, while the $20 silver coins featuring the Enterprise are being sold at face value.

Here’s where it gets dicey. The colored silver coins with the Enterprise are going for over $100 in Canadian dollars, even though it only has $20 in face value. But that pales in comparison to the pure gold Star Trek Delta Coin, which is based on the Starfleet insignia worn by the crew on the original series. Looks nice, doesn’t it? But that $200 coin is going to cost you $1,300 in Canadian dollars…if it weren’t already sold out.

William Shatner, who is Canadian, appeared at the ceremony to unveil the coins.