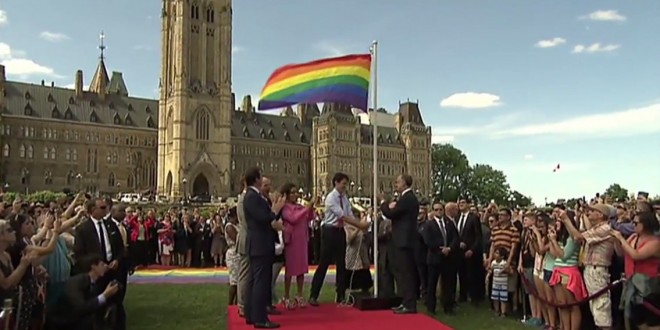 With a big shout-out to trans rights! The Star reports:

The Pride flag flew on Parliament Hill on Wednesday in a historic all-party show of support to mark the start of the month celebrating Canada’s lesbian, gay, bisexual, transgender and queer community.

Prime Minister Justin Trudeau had the honour of raising the distinctive rainbow banner on the Hill for the first time at a celebration attended by MPs from all federal parties, as well as dozens of onlookers.

“This is a great day for Canada and it is part of a long series of milestones this country has hit over the years,” Trudeau said.

“It hasn’t been easy, it hasn’t been automatic. A lot of people fought for a long time for this day and for the many days that led up to this day to happen.”

Today, for the first time in Canadian history, the Pride flag will be flown on Parliament Hill. #longoverdue #pride pic.twitter.com/k8cwBu9rdv

Previous POLL: Dead Heat In California For Hillary & Bernie
Next Obama Speaks Out On Transgender Students: We Should Treat Them With Dignity And Kindness [VIDEO]