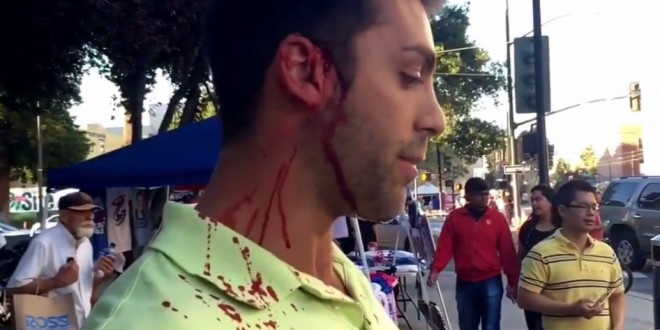 The Washington Post calls it an “ugly, bloody scene.”

Protests outside a Donald Trump rally in downtown San Jose spun out of control Thursday night when some demonstrators attacked the candidate’s supporters. Protesters jumped on cars, pelted Trump supporters with eggs and water balloons, snatched signs and stole “Make America Great” hats off supporters’ heads before burning the hats and snapping selfies with the charred remains.

Several people were caught on camera punching Trump supporters. At least one attacker was arrested, according to CNN, although police did not release much information. “The San Jose Police Department made a few arrests tonight after the Donald Trump Rally,” police said in a statement. “As of this time, we do not have specific information on the arrests made. There has been no significant property damage reported. One officer was assaulted.”

Protesters cornering Trump supporters as they leave. This woman taunted them. They cornered her & threw eggs at her pic.twitter.com/MiDGDBkKIo