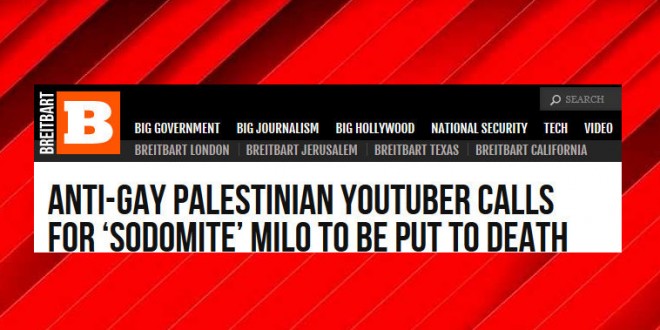 As readers of this site know all too well, for more than a year Christian activist Ted Shoebat has been calling for the genocide of homosexuals, Muslims, women who have abortions, and just about anybody else who displeases him. But Shoebat never seemed to catch the attention of Breitbart until this week, when he called for putting their homocon hero, Milo Yiannopoulos, before a firing squad.

And do they note that Shoebat is a rabid Christian activist who has appeared in an anti-LGBT documentary alongside top Republicans and the leaders of national Christian advocacy groups? Nope. To them, he just “considers himself” a Christian, which is, of course, obviously untrue because “he was raised in a Muslim Palestinian family.” Quite interestingly, some Breitbart commenters have concluded that Shoebat is a true Muslim while others have endorsed his Christian call to execute gays, including Yiannopoulos.