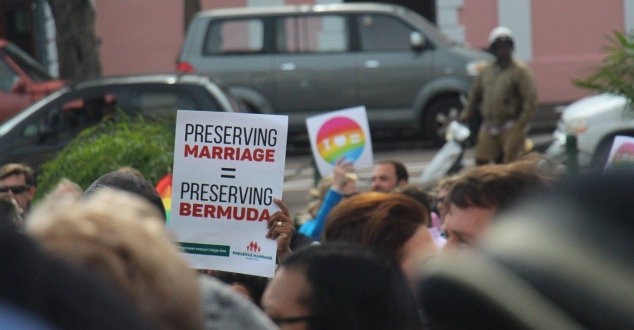 Bermudians overwhelmingly rejected same-sex marriages and civil unions by a greater than two-to-one margin in the referendum yesterday. However, the total number of votes cast was 20,804, or 46.89 per cent of the electorates, which is below the 50 per cent requirement to make the referendum valid.

Meanwhile, 63 per cent voted against civil unions in the second question. There was some joy for the “Yes, Yes” camp in that Region 4 and Region 7 — the polling stations at Botanical Gardens and Dellwood Middle School — voted in favour of civil unions, while another two were defeated by the closest of margins.

A total of 44,367 Bermudians were registered to vote in the referendum, however, the two questions would be deemed to be “answered” only with a voter turnout of 50 per cent or more. Representatives from Vote No Twice and Preserve Marriage were not available for comment last night as the results were being reported.

The referendum was non-binding but the government had said it would be “guided” by the will the people. Preserve Marriage is affiliated with the US-based Alliance Defending Freedom and their referendum materials cited anti-LGBT activists Ryan Anderson and Mark Regnerus. Bermuda is a British Overseas Territory.