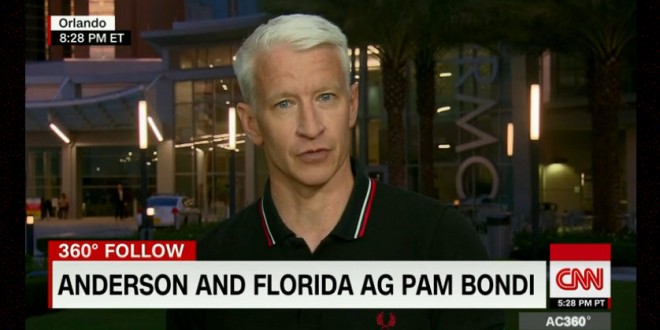 Anderson Cooper Responds To Pam Bondi: She’s Either Mistaken Or She’s Not Telling The Truth [VIDEO]

Fighting words. Anderson Cooper responded on Wednesday, June 15, to Florida attorney general Pam Bondi’s claims that their interview in the wake of the Orlando nightclub shooting, which aired live on CNN the previous day, was edited to portray her in a bad light.

“She’s either mistaken or she’s not telling the truth,” the CNN host said on his show, Anderson Cooper 360. “Let’s be real here. Ms. Bondi’s big complaint seems to be that I asked in the wake of a massacre of gay and lesbian citizens about her new statements about the gay community and about her old ones.”

“For the record, my interview was not filled with any anger,” Cooper responded on air on Wednesday. “My job is to hold people accountable, and if on Sunday a politician is talking about love and about embracing ‘our LGBT community,’ I don’t think it’s unfair to look at their record and see if they have ever actually spoken that way publicly before, which I’ve never heard her say.”

Previous SAN DIEGO: Feds Investigate Craigslist Posting Which Threatens Another Orlando-Style Terror Attack
Next Twitter Explodes After Trump Says “Ask The Gays” Which Candidate Will Be Better For Them [VIDEO]