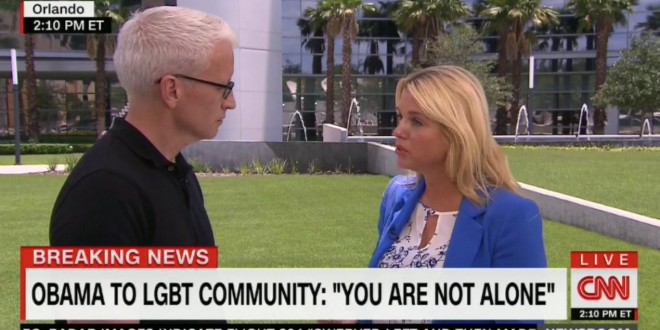 BOOM. Corrupt Florida Attorney General Pam Bondi just walked face-first into a gay buzzsaw named Anderson Cooper and it was BEAUTIFUL. Bondi was speaking to Cooper in Orlando, ostensibly to deliver a warning about scammers who might prey on people looking to donate to Pulse massacre victims, but the interview immediately went wildly off the rails when Cooper confronted her on her track record of opposing LGBT rights.

Cooper pounced, “Do you really think you’re a champion of the gay community? You used language accusing gay people of seeking to do harm to the people of Florida. You argued that in court. The hotline that you’ve been talking about on television, which allows family members and spouses of the dead to get information…had there been no gay marriage, you do realize that there would be no spouses. Isn’t there a sick irony in that? Isn’t there a sick irony that you, for years, were fighting that very idea?”

Watch every wonderful second of this.

“Governor Rick Scott, Attorney General Pamela Jo Bondi, State Surgeon General John H. Armstrong, and Secretary Craig J. Nichols (the “State Officials”), pursuant to Federal Rule of Civil Procedure 12(b), move to dismiss the amended complaints in these consolidated cases. This Court lacks jurisdiction to consider the claims against all but the DMS Secretary, and all claims fail on the merits. The Court should also deny the preliminary injunction motions because there is no likelihood of success on the merits, there is no immediacy requiring a preliminary injunction, and disrupting Florida’s existing marriage laws would impose significant public harm.”

Previous Pat Robertson: Gays & Islamists Are Allies So Christians Should Just Let Them Kill Each Other [VIDEO]
Next Disney Donates $1 Million To Orlando Victims