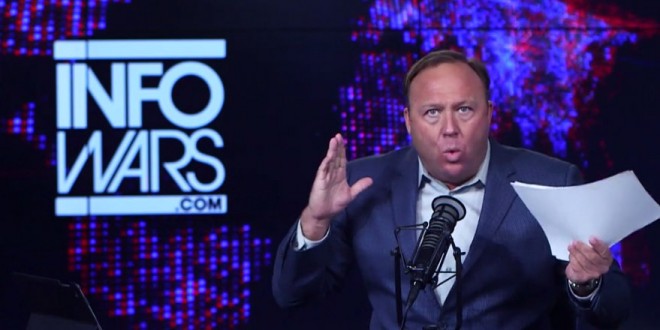 Alex Jones: Orlando Attack Was A False Flag That Obama Let Happen So He Can Grab Your Guns

You knew this was coming. Via Media Matters:

Conspiracy theorist and Donald Trump ally Alex Jones claimed President Obama let the tragic mass shooting at the Orlando gay nightclub Pulse happen because he wants to ban “your speech” and “guns.” Trump and his campaign surrogates have been heavily courting Jones and his audience during the presidential campaign.

Jones hosts The Alex Jones Show and is the proprietor of Infowars.com. He believes in toxic conspiracy theories about national tragedies, including the Oklahoma City bombing, Boston Marathon bombing, the Newtown, CT, school shooting, and 9/11.

While Jones for years has operated at the fringes of conspiracy media, he has been courted by Trump and advisers like Roger Stone and Stephen Miller. As a result, Jones has become one of the leading media allies for Trump’s campaign.

Jones repeatedly called the deadly Orlando terror attack a “false flag” and accused the government of letting the attack happen for political reasons. Jones’ website defines a false flag as a covert and deceptive operation that is used to “influence elections, guide national and international policy, and [to] cynically … formulate propaganda and shape public opinion as nations go to war.”