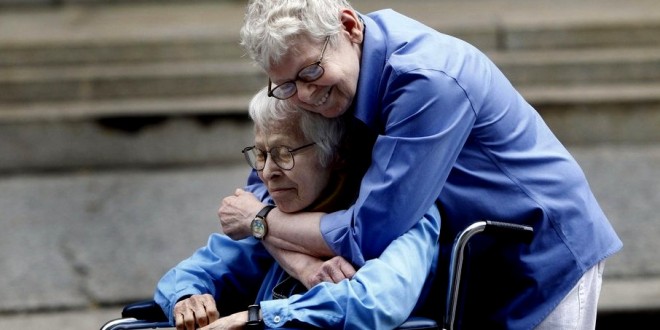 Connie Kopelov [seated], whose wedding to Phyllis Siegel in 2011 was the first legal same-sex marriage in New York City, died in Manhattan on Saturday. She was 90.

Her death was confirmed by Ms. Siegel, who said Ms. Kopelov had been in the late stages of Alzheimer’s disease.

Ms. Kopelov and Ms. Siegel had been partners for 23 years when they were married by the city clerk on July 24, 2011 — the same day that a state law took effect allowing same-sex couples to marry.

That morning, Ms. Kopelov, then 85, and Ms. Siegel, 76, were the first couple through the door of the marriage bureau, on Worth Street in Lower Manhattan.

The City Council speaker at the time, Christine C. Quinn, a lesbian and prominent gay rights activist, stood in attendance around 9 a.m. as the clerk, Michael McSweeney, said, “I now pronounce you married.”

RIP to Connie Kopelove. She and her partner, Phyllis Siegel were first same-sex couple married in NY. https://t.co/c2cZWRIFSh