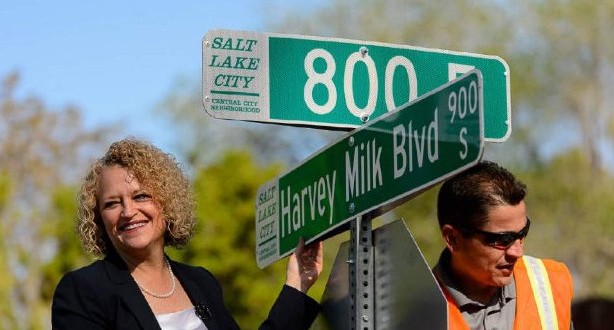 Mayor Jackie Biskupski put up the first street sign that renames a part of 900 South as “Harvey Milk Boulevard.”

The Salt Lake City Council recently voted unanimously to rename 900 South after Milk, who was one of the country’s first openly gay elected officials until his assassination in 1978.

“I am where I am because of people like Harvey,” Biskupski said, referencing her election as the first openly lesbian mayor of Salt Lake City.

The signs were paid for by Equality Utah. A celebration is taking place this morning.

honored to be a part of a momentous moment in Salt Lake City tomorrow. Harvey Milk Blvd 🌈 https://t.co/fs8BnyFsja pic.twitter.com/OSjW3IN5CI