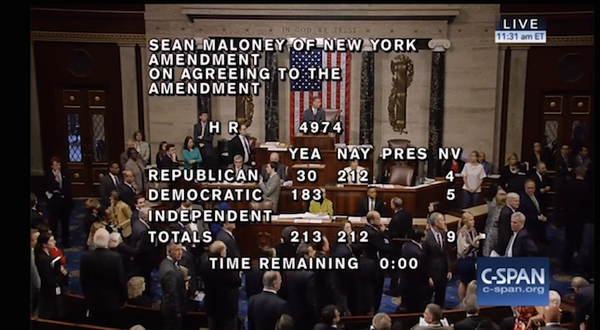 But check out the amendments. Politico reports:

The House late Wednesday night passed a spending bill amendment that would ban federal contractors who discriminate against lesbian, gay, bisexual, or transgender people, putting into law a 2014 executive order.

Rep. Sean Patrick Maloney (D-N.Y.) had attempted to attach a similar amendment to a Veterans Affairs appropriations bill last week, but House Republican leaders held the vote open and persuaded enough members to change their votes to defeat the measure. But on Wednesday, Maloney’s measure passed in a 223-195 vote as an amendment to an energy and water spending bill.

The amendment earned Republican support when Maloney allowed Rep. Joe Pitts (R-Pa.) to add a line to the end saying, “except as required by the First Amendment, the Fourteenth Amendment, and Article I of the Constitution.”

“Today’s vote is a strong reminder that equality isn’t a partisan issue,” said HRC Government Affairs Director David Stacy. “No American should face discrimination because of who they are or whom they love. While that principle won a victory that was elusive last week, it’s time to advance meaningful legal protections for LGBT people and pass the Equality Act. This vote can be a building block if Congress works together for protections that the overwhelming majority of voters want for LGBT Americans.”

The House also disappointingly passed an amendment offered by Rep. Robert Pittenger (R-NC) that prohibits funds appropriated by the bill from being taken away from any entity in North Carolina for any reason including fraud, failure to carry out the terms of a contract or if used in violation of the law. The broadly-worded amendment was intended to prevent any cessation of funds to the state of North Carolina over its anti-transgender law.. The 227-192 vote included 11 Republicans voting no./blockquote>

Equality wins! We have a long way to go, but achieved big victory. Will keep fighting until every #LGBT American is safe, can pursue dreams.

Previous Glenn Beck Guest Is Just Asking: What Patriot Will Step Up And Assassinate Trump If Need Be? [AUDIO]
Next Trump Campaign Accidentally Emails Plans To Attack Hillary Clinton With Decades-Old Whitewater Scandal