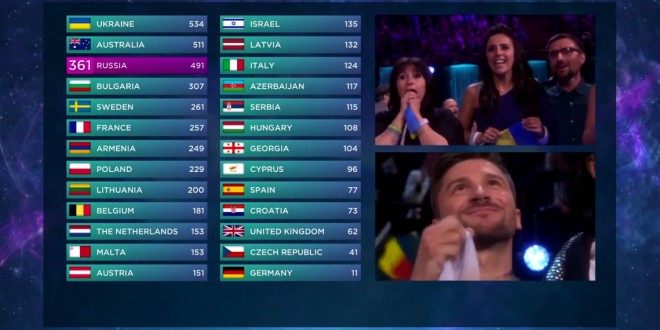 Ukraine’s Jamala won Eurovision 2016 tonight after the final result in the controversial new voting system failed to put Russia over the top. Ukraine’s win is arguably the most politically-charged result in Eurovision history. From the BBC:

Jamala is the first ever Crimean Tatar to perform at the contest and caused controversy ahead of the show over her political song, referencing the year when Stalin deported almost all of the ethnic group from its native region of Crimea in Ukraine.

The singer had dedicated the song to her great grandmother who was forced to leave along with a quarter of a million Tatars. It had been expected to finish in the top three but in a surprise result beat favourites Russia, which annexed Crimea from Ukraine in 2014 and had been angered by the song.

Collecting her award, an emotional Jamala thanked Europe for their votes, adding: “I really want peace and love to everyone.”

Sergey Lazarev, Russia’s entry, not incidentally, has a political story of his own. Via the Washington Post:

For the patriotic fervor the contest inspires in its viewers, Lazarev is a highly unlikely conduit. He has consistently and publicly spoken out against two of Russia’s most internally popular policies: exclusion of LGBT people from full rights as citizens and the annexation of Crimea from Ukraine.

When a Ukrainian television station asked him whether he saw the Black Sea peninsula as part of Russia, Lazarev said, “For me, no,” and added, “This joy that everyone — or the majority — feels that Crimea has returned to us, I don’t share this euphoria.”

This year’s contest was notably lacking in the usual over-the-top camp that has turned the event into the gay Super Bowl of Europe. One exception to that, ironically, was the Love Love Peace Peace number performed at the end by show’s hosts. Watch below as they lyrically and visually lampoon every Eurovision cliche. And keep an eye out for the very greasy, very hunky drummer.