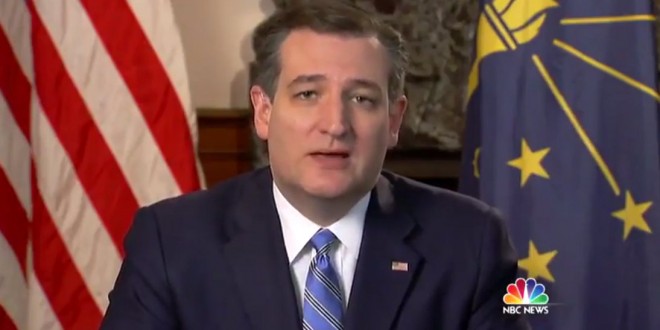 Ever since Donald Trump came out against North Carolina’s hate law, Ted Cruz has made the “bathroom” issue a major talking point of his media appearances. He did so once again this morning on Meet The Press. From the Human Rights Campaign:

“After invoking the importance of the Bill of Rights, Ted Cruz had the gall to spread vicious lies about transgender people and laws that deny us critical freedoms,” said HRC Communications Director Jay Brown. “Ted Cruz’s fear-mongering campaign about attacks in restrooms has never been documented in the decades that more than 100 local non-discrimination protections have existed. The reason we need these local laws in the first place is because Congress has yet to pass a federal law protecting LGBT people, who are at risk of being fired, evicted or denied services in a majority of states because of who they are. Ted Cruz showed us firsthand today how important it is that we elect Hillary Clinton to fight for full federal equality in November.”

Previous Wingnuts Meltdown Over Larry Wilmore’s Nerd Prom Closing: “Yo, Barry, You Did It, My N*gga” [VIDEO]
Next PHILADELPHIA: Blogger Sues Gay Basher Kathryn Knott And Her Police Chief Father Over Alleged Reprisals