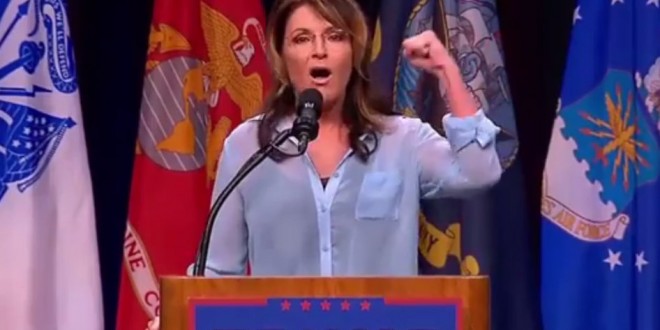 Sarah Palin, the 2008 Republican vice-presidential nominee, savaged President Obama here Friday for what she termed his “apology lap” in Hiroshima, a Japanese city destroyed by a U.S. atomic bomb during World War II.

Addressing a large Donald Trump campaign rally in downtown San Diego, Palin accused Obama of “dissing our vets” with his visit to Hiroshima — the first by a sitting U.S. president and one designed to honor the memory of all who were lost in the war.

Palin said Obama’s visit suggested that the president believes that “the greatest generation was perpetuating the evil of World War II.” She added, “Our commander in chief suggesting – actually, lying in suggestions – to the world that we were wrong to prove that we would eradicate evil in World War II.”

Thousands of Trump supporters cheered Palin and booed the president. The former Alaska governor-turned-reality TV star and tea party heroine said Trump would be a president “who knows how to win.”

The audio on the clip below is rather low. Probably a good thing.

Previous This Weekend: Manhattanhenge Returns To Gotham
Next Banana Man Ray Comfort: DC Police Won’t Let Me Give Out Gift Cards At Massive Rally For Atheism