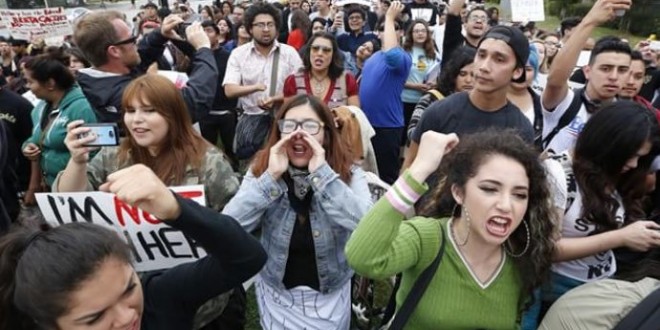 A group of Bernie Sanders supporters and other protesters disrupted an appearance by Hillary Clinton in southern California.

The Democratic presidential frontrunner was repeatedly interrupted Thursday as she spoke to a largely Latino crowd in Monterey Park, where Union del Barrio organized a protest against Clinton over her immigration policies and opposition to a national $15 hourly minimum wage, reported KNBC-TV.

Clinton warned that Donald Trump, the presumptive Republican presidential nominee, would create a “deportation force to round up millions of people” — but her opponents remained unconvinced by her message. “She would do absolutely nothing to help the middle class,” said Cilena Aziz, a Sanders supporter.

Protesters chanting, “she’s not with us,” forced Clinton to cut short her scheduled speech to just 14 minutes — and signaled she may have a difficult time rallying Sanders supporters behind her campaign if she wins the Democratic nomination.