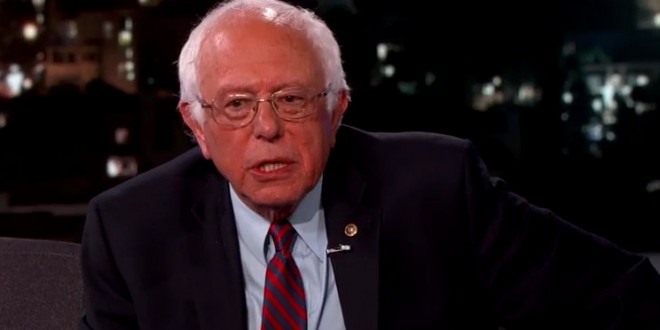 During his appearance on “Jimmy Kimmel Live!” Thursday night, Bernie Sanders remained amenable to debating Donald Trump — a proposition raised by the presumptive Republican presidential nominee during his visit to the late-night talk show the previous evening.

“You made it possible for us to have a very interesting debate about two guys who look at the world very, very differently,” Sanders told Kimmel.

“Oh boy, do you guys look at it differently,” Kimmel said, laughing. Kimmel told Sanders his goal is to bring the two men together. “I don’t build walls, I build bridges,” he said, making an obvious nod to Trump’s campaign promise to build a wall along the U.S.-Mexico border.

Previous MISSISSIPPI: Dem AG Says Other Things Are More Important Than Joining Anti-Trans Suit Against Feds
Next House Republicans Walk Out On Colleague Who Called Them Sinners For Backing LGBT Protections