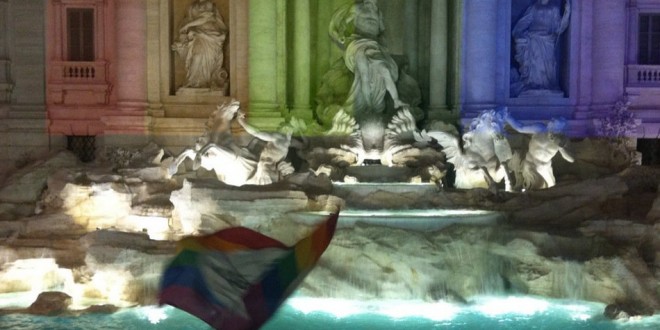 Earlier today Italy’s legislature made the final approving vote on its civil unions bill after Prime Minister Matteo Renzi called for a confidence vote that would have cost him his job if the bill had failed. Tonight LGBT Italians and allies are celebrating at Rome’s iconic Trevi Fountain, which has been lit in the rainbow colors in solidarity. After being turned off for nearly two years, the Trevi Fountain came back to life in November following the completion of a $4M renovation project that was entirely financed by the fashion house Fendi. (Tipped by JMG reader Andrea)

VIDEOS: The first clip is about today’s news. The second clip is a reminder of the massive anti-gay rallies held earlier this year in opposition to civil unions. Snork!