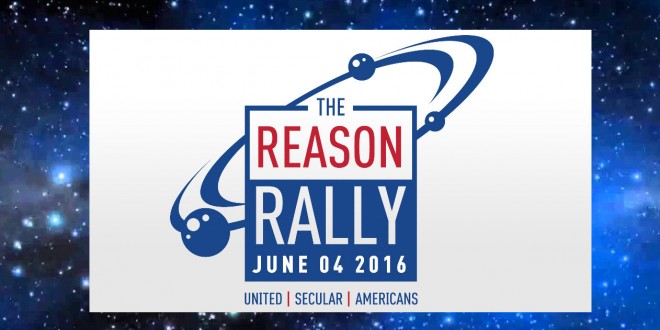 As they did in 2012, tens of thousands of atheists, skeptics, and secularists will rally on the Washington Mall on Saturday June 4th. From the Reason Rally website:

The goal of Reason Rally 2016 is to showcase the presence and power of the nonreligious voting bloc, and to demand that reason be put at the forefront of our public and political discourse. We want to excite and empower attendees about that message so they bring it back home and apply it at the local and state levels.

Not only are we celebrating our secular, atheist, agnostic, humanist, freethinking, and nonreligious identities, we are preparing to exercise our power at the voting box to bring good sense back to government. But Reason Rally 2016 is first and foremost a celebration — we’ll have awesome speakers, bands, entertainment, and political leaders — all there to celebrate and support the secular community.

It’s important for us as a community to just come together, be among like-minded folks, and celebrate who we are and what we’ve accomplished. We’re calling it a “voting bloc party” because we want to capture that feeling of community and celebration alongside the strong message of growing political influence. Stand up for reason and make our presence felt. We hope to see you at the Rally.

RELATED: Christian groups and street preachers, of course, will not miss this opportunity to show up and scream about damnation and White Jesus.

Previous DO NO HARM: House Democrats Seek To “Correct” Federal RFRA Law With Amendment Banning Discrimination On Religious Grounds
Next Trump: When I Said Women Should Be Punished For Abortion, I Meant They Should Punish Themselves