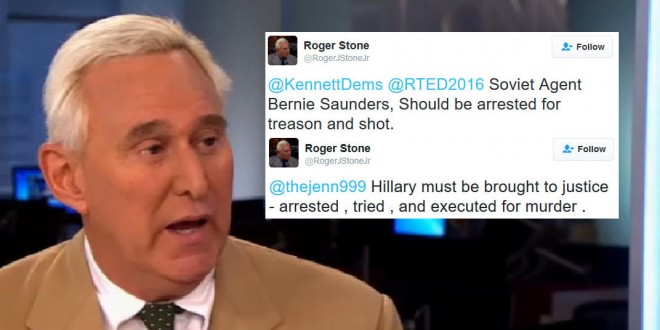 Donald Trump ally Roger Stone has repeatedly used his Twitter account to call for the killing of public figures. Stone tweeted that Hillary Clinton and George Soros should be “executed,” Sen. Bernie Sanders (I-VT) should be “shot” for “treason,” and “angry citizens should find and hang” Gov. Dannel Malloy (D-CT). He wrote that former Sen. Rick Santorum (R-PA) “will never be President- I will order a mail-order rifle first.”

Stone has also fantasized about the deaths of media figures. Stoned tweeted to journalist Jill Abramson, “DIE BITCH!”; tweeted about CNN commentator Ana Navarro “killing herself”; and wrote of Fox News commentator Ed Rollins: “Ed Rollins is on FOX ? If he isn’t dead he should be #hack #loser #fraud.”

Stone is a longtime adviser and confidant to Trump. He now heads a pro-Trump super PAC and has pledged to disclose the hotels and room numbers of Republican National Convention delegates who are purportedly trying to “steal” the nomination from Trump.