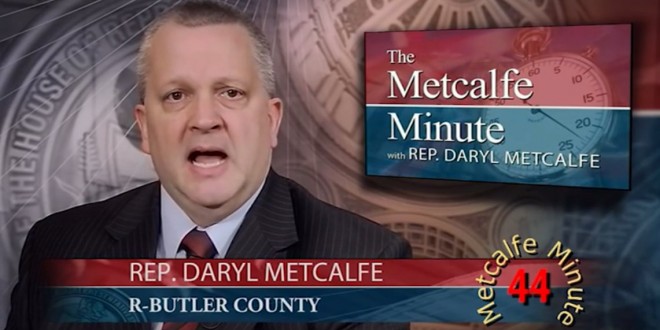 Nutcase Daryl Metcalfe is at it again. Via Newsworks:

Ninety-seven Republican state representatives in Pennsylvania — including several from the Philadelphia region — have signed off on a letter to President Barack Obama, calling the new federal directive to make public schools transgender-inclusive “unconstitutional” and an “extreme outrage.”

“Plainly, this directive will allow men to go into legally sex-separated bathrooms with young girls,” it states. “The parents of these young girls are rightly concerned about your policy and its implications for their daughters’ safety.”

Transgender rights advocates call that argument a “red herring,” not borne out by an actual uptick in predatory behavior in places that have had transgender-inclusive bathroom policies. PREVIOUSLY ON JMG: In 2013 Metcalfe failed in multiple attempts to thwart the advance of same-sex marriage, including a call for the state Attorney General to resign. Also that year Metcalf used a chamber rule to stop openly gay state Rep. Brian Sims from speaking about the historic DOMA ruling on the state House floor, saying that Sims was in “open rebellion against God’s law.” In 2011 and in 2012 Metcalfe introduced bills to insert a ban on same-sex marriage into the state constitution. Both attempts failed.