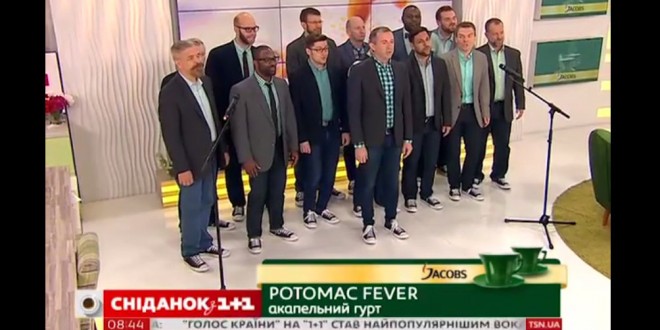 Earlier today I reported the grim news that neo-Nazis are planning a “bloodbath” at next week’s Kiev Pride. But now comes something much more encouraging. JMG reader Matt Holland writes:

This morning, on “Breakfast with 1+1”, a national Ukrainian morning show that reaches over 15 million people, Potomac Fever one of the small ensembles from the Gay Men’s Chorus of Washington, DC, was interviewed and had the honor of being the first openly gay choral group to perform on Ukrainian morning television. Many in the Ukrainian LGBTQ community consider this time be huge! There were technical issues with the translator, but hopefully the message came through loud and clear. They are gay, proud, and spreading the message of equality and tolerance in Ukraine.

Watch below as Potomac Fever performs True Colors and Over The Rainbow.

Previous One Million Moms: The Muppets Show Has Been Canceled Because Jesus Blessed Your Donations
Next BRITAIN: NHS Rejects PrEP For Second Time