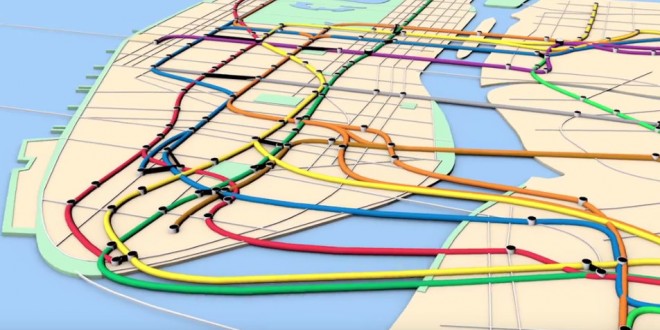 New York City’s MTA has issued a fascinating and informative video which lays out the coming years-long closure of the L train, the busiest downtown link between Brooklyn and Manhattan. From the New York Times:

The Metropolitan Transportation Authority is asking riders of the L subway how they would like their nightmare: nasty, brutish and shortish, or somewhat less painful but twice as long. Those were the choices offered Thursday night at a community meeting in Williamsburg, Brooklyn. Another meeting is scheduled in Manhattan this Thursday. The M.T.A. says the L’s two tunnels under the East River, flood-ravaged by Hurricane Sandy, need to be overhauled completely. Doing it all at once means a year and a half with no L train in Manhattan and reduced service in Brooklyn. Closing one tunnel at a time makes it a three-year project, with some trains crossing the river but the whole line afflicted by crowding and delays.

It was obvious that M.T.A. officials preferred the first plan, but they made a good show of open-mindedness at the meeting, billed as a chance to keep riders informed and to solicit their opinions as they headed toward L-maggedon, which would begin, under either plan, in 2019. The officials were adamant about only two things: that fixing the tunnels was utterly necessary, and that the usual commuter-friendly solution — working on repairs nights and weekends — was impossible because shuttling equipment in and out and removing dangerous silica dust would take too long.