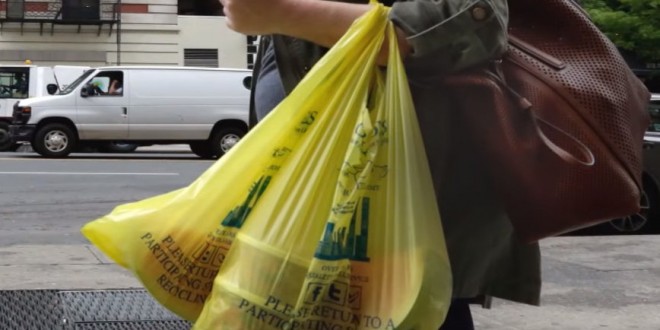 New York City will impose a five cent fee on plastic and paper shopping bags starting October 1, following a contentious City Council vote Thursday afternoon. The Council voted 28-20 in favor of the legislation, which also has the support of Mayor de Blasio. The bill won’t be actively enforced until April 2017.

“There is going to be a large amount of time to really get the information out to the public,” said Council Speaker Melissa Mark-Vivereto, who endorsed the bill last week. “We’re not going to take people by surprise.”

Today’s legislation is a less-stringent version of a bill first introduced back in 2013, which would have charged 10 cents per plastic bag. People who use food stamps will not have to pay the extra charge, and bags used to package medication and takeout from restaurants will be exempt, as well as grocery store bags used to wrap up meat and produce.

The five cent fee, not to be confused with a government tax, will go directly back to shop owners. And while the primary goal is to cut down on the nearly 10 billion plastic bags that clog sewer drains and decorate sad trees each year, sponsors Margaret Chin and Brad Lander say the accompanying paper fee will discourage New Yorkers from simply switching over to paper bags.