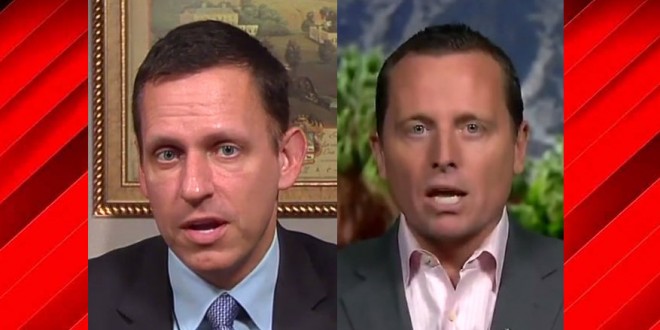 Billionaire PayPal co-founder Peter Thiel and Fox News commentator Richard Grenell have been named as California delegates for Donald Trump. You may recall that Grenell was the spokesman for the 2012 Romney campaign for about ten seconds until AFA radio host Bryan Fischer went on a rampage and Grenell “resigned.” Fortune has more about Thiel’s recent political history:

Thiel, a libertarian, has supported past Republican causes. He was a large donor for past GOP presidential candidate Ron Paul and also gave heavily to Texas Senator Ted Cruz’s bid for the Senate in 2012. In August, Thiel gave $2 million to Conservative Authentic Responsive Leadership for You and America (CARLY), a Super PAC supporting the presidential bid of former Hewlett Packard CEO Carly Fiorina, who was later named as Cruz’s vice presidential running mate against Trump.

Thiel was also a supporter of GOProud until they collapsed into a pile self-hating fairy dust. In order to be approved by the Trump campaign, the men had to sign this pledge:

“I endorse Donald J. Trump for the office of President of the United States. I pledge to cast ALL of my ballots to elect Donald J. Trump on every round of balloting at the 2016 Republican National Convention so that we can MAKE AMERICA GREAT AGAIN!”

RELATED: Also among Trump’s approved 169 California delegates is notorious white supremacist William Johnson, who today says this to Mother Jones: “For many, many years, when I would say these things, other white people would call me names: ‘Oh, you’re a hatemonger, you’re a Nazi, you’re like Hitler.’ Now they come in and say, ‘Oh, you’re like Donald Trump.'”

Previous Pat Robertson: Homosexuality Will Destroy Us Because We’re Drunk On The Wine Of Fornication [VIDEO]
Next Bernie Sanders Wins West Virginia Primary