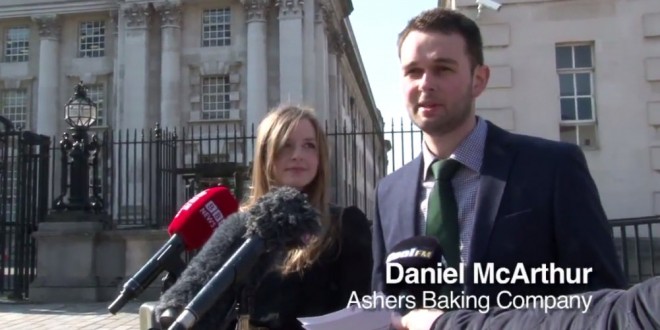 Christian bakers found guilty of discrimination for refusing to make a cake with a pro-gay marriage slogan could not commit a sin by going against their deeply held consciences, their lawyer has told an appeal hearing.

The McArthur family, who run Ashers Baking Company in Belfast, are seeking to overturn a judgment which found they acted unlawfully by declining the order placed by LGBT activist Gareth Lee in 2014.

The business has insisted the case has implications for freedom of expression across the UK. “They could not in conscience provide a product with a message that was inconsistent with their deeply held religious beliefs in circumstances where the evidence was clear that they believed that to do so would be sinful,” Barrister David Scoffield QC said.

The appeal was due to be heard in February but was dramatically postponed after a late intervention from John Larkin QC, Attorney General in Northern Ireland, which raised a potential conflict between the region’s equality legislation (which is not the same as the 2010 Equalities Act) and European human rights laws.

Chief Commissioner of the NI Equality Commission Dr Michael Wardlow said before the hearing: “This is case about a man who walked into a shop two years ago and didn’t get the service that he would expect. And I don’t want Northern Ireland to be a lottery where when we go into a shop or ask for a service that we have to second-guess the conscience or value base of the service provider.”