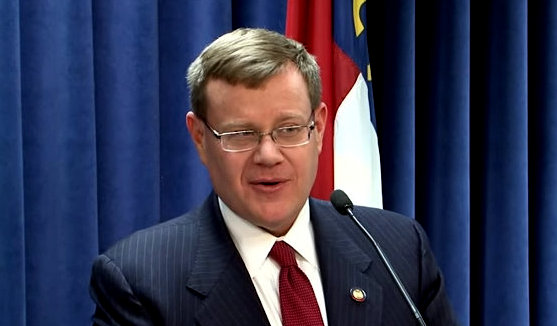 NORTH CAROLINA: State To Defy Justice Department, Will Not Comply With Order On Anti-LGBT Hate Law

The department sent state leaders a letter Wednesday saying that the law violates the U.S. Civil Rights Act and Title IX – a finding that could jeopardize billions in federal education funding. Those laws ban discrimination in education based on sex and employment discrimination.

“We will take no action by Monday,” Moore told reporters Thursday. “That deadline will come and go. We don’t ever want to lose any money, but we’re not going to get bullied by the Obama administration to take action prior to Monday’s date. That’s not how this works.”

Mark Creech of the Christian Action League, one of the anti-LGBT hate groups that spawned the bill, is screaming on Facebook:

“At the hands of his henchmen in the U.S. Department of Justice, King Obama, has delivered his message of intimidation to the state of North Carolina.

“The Administration has taken it upon itself to declare “sex” in Title VII and Title IX includes “sexual orientation” and “gender Identity.” This interpretation goes far beyond the language adopted and intended by Congress. Nevertheless, the Great Pontiff of Political Correctness holds the educational futures of our state’s children hostage, while dangling the money bags of federal funds over their heads, demanding in exchange North Carolina bow to the madness of obliterating male and female distinctives – something foundational to every society in human history.

“The battle over North Carolina’s common sense law, HB 2, has national significance. Must every state, more specifically, 28 other states, with laws similar to our own be forced to sacrifice their fundamental right to privacy and safety when using a restroom, locker room, or shower? That is the question of the hour.

“If this doesn’t make people righteously indignant, then our culture has lost any capacity for real moral outrage. We deserve exactly what we’ll get – confusion and chaos. Either truth is something evidential and verifiable or it’s purely subjective and determined wholly in the eye of the beholder.

“It is imperative the Governor and state lawmakers remain strong and fight the advancement of this misguided agenda. No federal law, approved by the people’s Representatives in Congress requires North Carolina comply with the Obama Administration’s demands.”