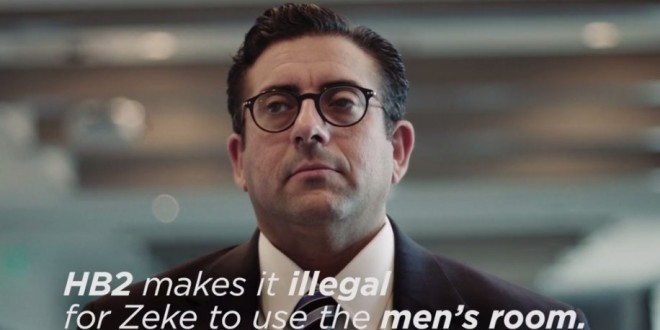 In this new ad, Zeke Christopoulos – a transgender man who lives in Asheville, North Carolina – and two of his professional colleagues discuss their concerns about the discriminatory House Bill 2, which knocked down existing non-discrimination protections for LGBT people and banned transgender people from using public restrooms.

One of Zeke’s co-workers, Patricia Hickling Beckman, shares her initial reactions to learning Zeke transitioned from female to male, and Zeke explains the absurd possibility of what could happen to him under HB 2 when a transgender man like himself uses a public bathroom.

This video is a joint product of the American Unity Fund, Freedom for All Americans and Equality North Carolina, state and national organizations working toward repeal of House Bill 2.