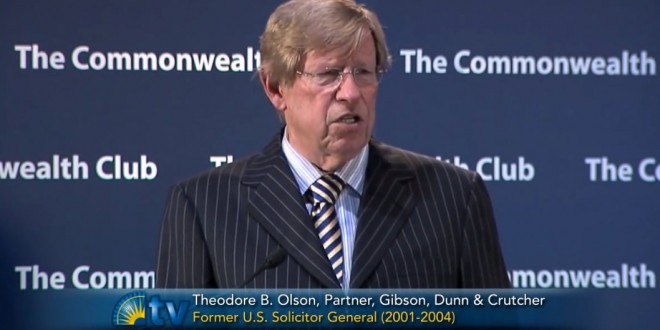 “HB2 discriminates against fellow citizens because of who they are,” said Olson. “This law directly challenges the legitimacy of the identity of transgender persons and then compels them to deny it every time they use a public restroom. There can be no doubt that this is bad for business in North Carolina. It demeans business’s customers, it demoralizes their employees, and it contravenes their values of inclusiveness and respect. I’m proud to join the Human Rights Campaign and the business community in fighting this discriminatory legislation.”

“HB2 is a hateful piece of legislation that has not only harmed thousands of people across North Carolina, but hurt companies and damaged the state’s economy,” said HRC President Chad Griffin. “We are proud that Ted Olson, one of the nation’s leading conservative legal minds, will lead a brief on behalf of the business community and advocate for the equal rights and dignity of transgender Americans.”

A partner in Gibson Dunn’s Washington, D.C. office, Mr. Olson served as Solicitor General of the United States from 2001-2004 and is widely recognized as one of the nation’s premier appellate advocates. He has argued 62 cases in the Supreme Court of the United States, including the two Bush v. Gore cases arising out of the 2000 presidential election and Hollingsworth v. Perry, the case upholding the overturning of California’s Proposition 8, banning same-sex marriages. For his work to advance marriage equality, Time magazine in 2010 named him as one of the 100 most influential people in the world.