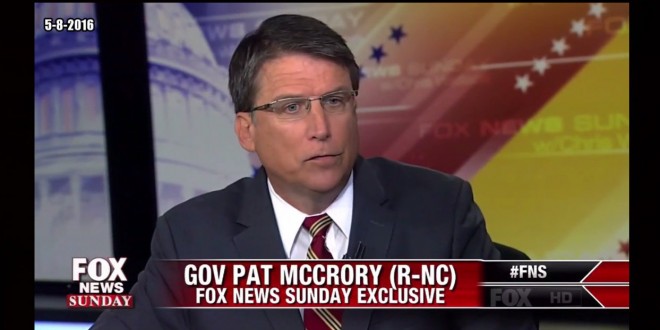 To his credit, host Chris Wallace points out that there are no cases of trans people assaulting people in restrooms. Fox News reports:

However, McCrory would not say what his decision will be when repeatedly pressed for an answer, saying only that he’s exploring “all legal options.” One option would likely be a court challenge.

“I don’t think that three working days is enough time for such a pretty big threat,” he told Fox News. “It’s the federal government being a bully, making law.” McCrory also said he doesn’t have the legal authority to change laws and that the expectation that he can is “unrealistic.”

“If HB2 was passed in a day, it can be repealed in a day, too. Pat McCrory’s excuse that he needs more time to comply with the Department of Justice after he rammed through and signed HB2 in the dark of night in a matter of hours doesn’t hold water,” said HRC Communications Director Jay Brown. “Pat McCrory even admitted on national television that his biggest excuse for passing HB2 is a lie. He couldn’t cite a single example of threats to public safety from non-discrimination ordinances like the one in Charlotte. That’s because they do not exist. HB2 is breaking federal civil rights laws and has put billions of dollars in federal funding on the line. It must be fully repealed immediately.”

“Failing to meet the deadline set by the DOJ jeopardizes billions of dollars in federal funding for North Carolina. This is not the time to play political games. Governor McCrory needs to make the repeal of HB2 his number one priority before the deadline expires.” said Equality NC Director of Advancement Matt Hirschy. “HB2 was passed in a under a matter of 12 hours and was signed by Governor McCrory in the dead of the night. After months of economic havoc, and now with billions of dollars in federal funding hanging in the balance there is simply too much on the line to delay a full repeal of HB2.”