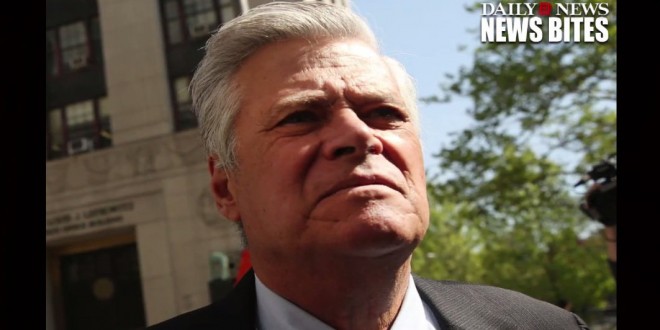 In a refreshing change for New York state politics, today it was a Republican former lawmaker that was sentenced to prison. Instead of a Democrat. For once. From the New York Times:

Dean G. Skelos, the once powerful Republican majority leader of the New York State Senate who was convicted with his son in December on federal corruption charges, was sentenced to five years in prison on Thursday.

The sentencing of Mr. Skelos is the second instance in 10 days in which a former senior New York lawmaker was sent to prison for abusing his office. It concludes an extraordinary chapter during which two trials held a block apart at almost the same time last year exposed a culture of kickbacks, secret deals and nepotism in the State Capital in Albany.

But while the crimes and 12-year prison term of Sheldon Silver, the former Democratic speaker of the State Assembly, exceeded that of Mr. Skelos and his son, Adam B. Skelos, the Skeloses’ trial stood out for its gritty, unvarnished look at the personal and political dealings of a family immersed in Albany’s back channels.

The evidence against the Skeloses, who were convicted of bribery, extortion and conspiracy, was remarkable for both its brazenness and its familial motivation: The father seemed willing to do anything for his son.

This wasn’t the only news for the wretched Skelos family today:

The apple doesn’t fall far from the corrupt tree. A nephew of crooked ex-State Senate Majority leader Dean Skelos was arrested Thursday for grabbing a Daily News reporter’s phone and throwing it across the street as he wrenched her wrist following the disgraced pol’s sentencing alongside his ne’er-do-well son .

The blue suit-wearing goon pushed another photographer and shouted “You wanna go?” as he exited Manhattan Federal Court shortly before grabbing The Newser asking if he was an associate of the disgraced family.

He manhandled the reporter’s wrist in full view of media outside the courthouse. The 27-year-old bozo was identified by police as Basil “Billy” Skelos. Cops told The Newser he was going to be charged with assault in the third-degree.

The second clip below is from May 2015 and explains the charges against Skelos.