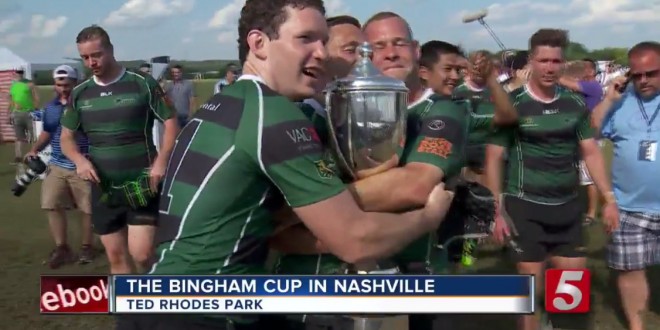 Awarded for their grace, dedication and commitment to the values of rugby, the Melbourne Chargers A’s haven’t stopped celebrating after they won the Bingham Cup yesterday, scoring 20 to 7 against the Sydney Convicts at the world championships in Nashville, Tennessee.

The 8th Mark Kendall Bingham Memorial Cup saw the Music City transform into the Rugby City, as players from gay and inclusive teams around the world were welcomed to some Southern hospitality as they competed in three days of intense sport.

“I am so inspired by the kind of rugby that I saw played in the last three days,” said Mark Bingham’s mother Alice Hoagland. “We have been made so welcome and at ease in the south. Nashville is a very special city and has shown how special we are.”

Bidding to host the 2018 Bingham Cup are Toronto, Edinburgh, London, and Amsterdam.