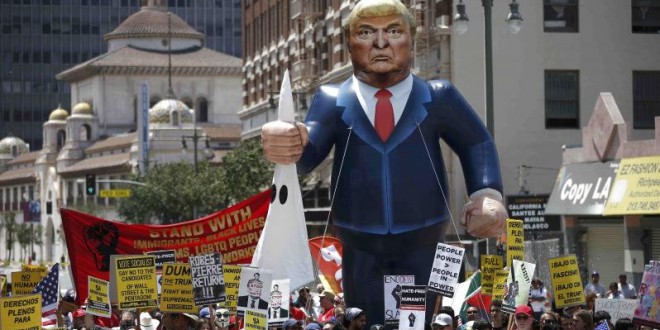 Hundreds of people marched through Los Angeles on Sunday in a May Day rally that took aim at Republican presidential front-runner Donald Trump for his anti-illegal immigration platform that includes building a wall along the U.S. border with Mexico.

The demonstration in America’s second most populous city, which has a large immigrant population, came just days after protesters smashed the window of a police car and blocked traffic outside a Trump campaign event in Costa Mesa, California, 40 miles (64 km) southeast of Los Angeles.

The rally in Los Angeles remained peaceful and drew smaller crowds than some past May Day demonstrations in the city, with several hundred people marching through downtown at one point but largely dispersing by midafternoon. Members of the crowd carried a large blow-up effigy of Trump holding a Ku Klux Klan hood, along with signs that read: “Dump Trump.”

The rally in Seattle was not so peaceful. From NBC News:

At least nine protesters were arrested and five police officers injured during May Day clashes in Seattle where flares, bricks and Molotov cocktails were thrown, authorities said.

The anti-capitalist disorder followed a peaceful march earlier in the day by advocates for workers and immigrants — one of several nationwide events Sunday calling for better wages for workers and work permits for undocumented migrants.

One officer was struck by a rock, one was hit by a Molotov and a third was bitten, the Seattle Police Department said. The nature of the injuries to the other two officers was not immediately known.

The anti-capitalist demonstrators carried signs including one saying: “We Are Ungovernable.” Police deployed blast balls — small firework-like devices that give off a loud bang and a dose of pepper — amid reports of assaults on officers and broken windows.