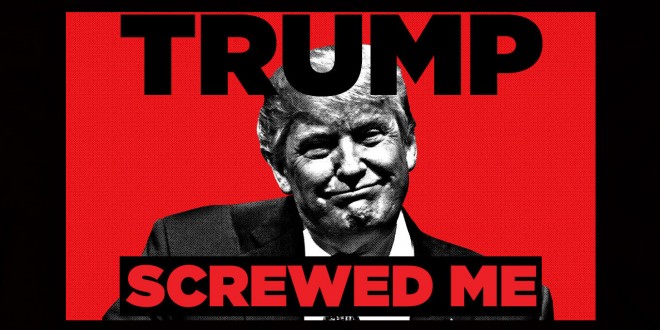 A Democratic group is trolling for anti-Donald Trump stories — and trolling the presumptive Republican nominee — with a new website called DonaldTrumpScrewedMe.com.

American Bridge, a Democratic outside group whose head has ties to Hillary Clinton, is launching the new website aimed at getting some nasty facts on The Donald. The website is geo-targeted so if you’re in or near one of Trump’s many properties, it will pop up in your Google ads.

“Were you one of Donald Trump’s victimized employees? Do you know of illegal or inappropriate behavior at one of Trump’s businesses or construction sites?” the website asks. “If you have been personally screwed by Donald Trump, or have a friend or relative who has been taken advantage of by Trump, we want to hear from you!”

The digital ads will target Trump’s properties in Manhattan, Atlantic City, and Palm Beach to seek information from current and former employees and tenants, as well as “people who were scammed by Trump’s various business ventures,” according to the group.

Previous PepsiCo CEO Stands Firm After Right Wing Activists Warn That Company Will Become “The Next Target”
Next Wingnut Rep. Louie Gohmert: I’ll Back Donald Trump If He Apologizes For Lying About Ted Cruz [VIDEO]