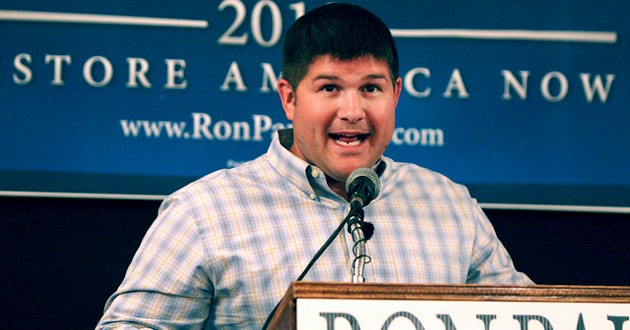 A former aide to Ron Paul and current strategist for a pro-Donald Trump super PAC was convicted Thursday of falsifying campaign records in a 2012 scheme to pay for a presidential endorsement. A federal jury in Iowa found Jesse Benton guilty on all counts, which included conspiracy and false records charges. Benton was convicted along with John Tate and Dimitrios Kesari, also former Paul aides. Benton is chief strategist of the Great America PAC, the primary PAC backing Trump’s presidential bid.

The charges stem from 2012, when Benton, Tate and Kesari were working for Paul’s presidential campaign. They were charged with conspiring to steer $73,000 to Iowa state Sen. Kent Sorenson to switch his support to Paul over Michele Bachmann ahead of the 2012 Iowa caucuses. Most of the counts of the indictment stem from the falsified campaign reports made to cover up the payments to Sorenson in exchange for the switch in support.

You may recall that now-former Sen. Sorenson helped lead the 2011 campaign to overturn same-sex marriage in Iowa. Earlier this year he was tried for domestic abuse. He has not yet been sentenced on the bribery or assault charges and faces 25 years in prison on the federal charges alone.

Previous Dr. Stabby: Trump Might Pick A Dem Running Mate
Next Reince Priebus Warns: Anybody Who Mounts A Third Party Bid Is Handing The Election To Hillary Clinton