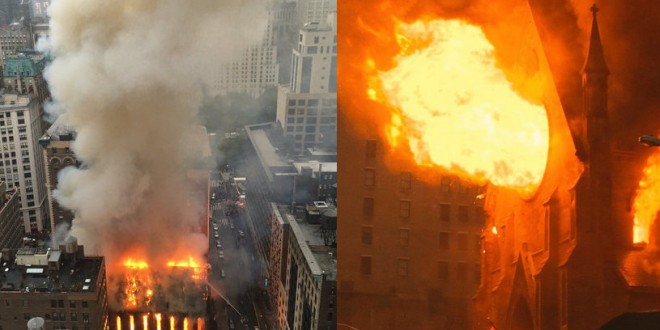 Firefighters were still dousing flames Monday morning after a massive fire gutted a historic church in Manhattan on Sunday, the day its Serbian Orthodox parishioners had joyously celebrated Easter.

The fire started Sunday evening and quickly engulfed the Serbian Orthodox Cathedral of Saint Sava in the Flatiron neighborhood, the FDNY said. More than 700 parishioners had celebrated Easter Mass earlier in the day and enjoyed a luncheon, but the cathedral was empty when the fire started.

The cathedral, formerly known as Trinity Chapel, was designed in 1850 by architect Richard M. Upjohn in the Gothic Revival style. The chapel was an active Episcopal Church for several decades until 1915, when the area became more commercial and parishioners decided to relocate.

The Serbian Orthodox Church purchased the structure from the Episcopal Diocese in New York in 1943. The church, on West 25th Street in the city’s Flatiron District, was designated a New York City landmark in 1968.

The cause of the blaze is not yet known. Breitbart commenters are claiming that the fire was set by Muslims. Of course. The second video below is really something.

Previous Bernie Sanders: The Convention Will Be Contested So Superdelegates Should Consider Backing Me [VIDEO]
Next May Day Rallies Feature Anti-Trump Theme [VIDEO]