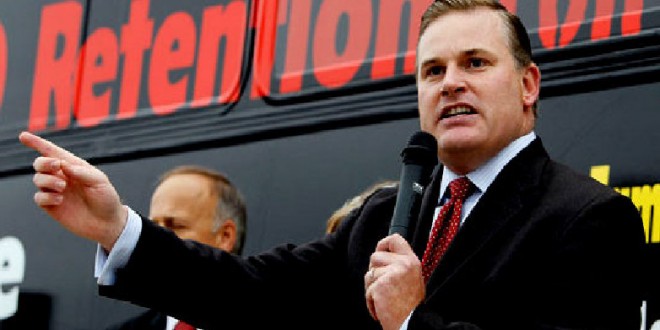 After several dozen increasingly desperate money begs since Obergefell, we knew that Brian Brown was going to have to find a new home for his open hatred of LGBT people. And since Brown has already worked with the viciously anti-LGBT World Congress of Families, today’s news comes as no surprise. Via press release:

Brown was elected at the recent World Congress of Families X conference in Tbilisi, Georgia. He will continue to serve as president of NOM. “I am honored that the Board of the World Congress of Families has elected me to serve as its president, and I look forward to continuing to work to advance the pro-family movement in the US and around the world,” Brown said. “Preserving and promoting the natural family as the core institution of society is an essential task if we are to build strong, stable, healthy communities.”

The World Congress of Families (WCF) is anchored in truths enshrined in the United Nations’ Universal Declaration of Human Rights, which provides that, “Everyone has the right to freedom of thought, conscience and religion” (article 18), and that, “The family is the natural and fundamental group unit of society and is entitled to protection by society and the State” (article 16(3)). WCF focuses on providing that protection to which the natural family is entitled, while also protecting the right to freedom of conscience and religion. WCF upholds the rule of law, condemns violence, and respects the dignity and rights of all.

“In recent years, secular leaders around the world have become obsessed with advancing so-called ‘alternative’ family structures. But there is no family structure more valuable and important to children and civilization as a whole than that of a married father and mother raising the children born of their union in an intact and loving family,” Brown said. “The natural family produces the best outcomes for society – promoting child health and well-being, encouraging marital happiness, enhancing economic prosperity, reducing delinquency and criminality, enhancing educational attainment, promoting spiritual growth, and securing liberty and human dignity. I look forward to contributing to WCF’s work to develop and advance pro-family policies around the world.”

NOM has participated in several anti-LGBT campaigns overseas, including when Brian Brown attended the World Congress of Families summit at the Kremlin. That event concluded with a formal written call (issued in both English and Russian) for more nations to criminalize homosexuality.

Let’s hope that Brown is as successful overseas as he was at home.

PREVIOUSLY ON JMG: Britain’s Channel 4 reports that the World Congress of Families is fomenting anti-LGBT violence across Africa. WCF communications director declares that “Hitlery” Clinton is too ugly to be president. Brian Brown declares “God bless Russia!” at WCF meeting at the Kremlin.