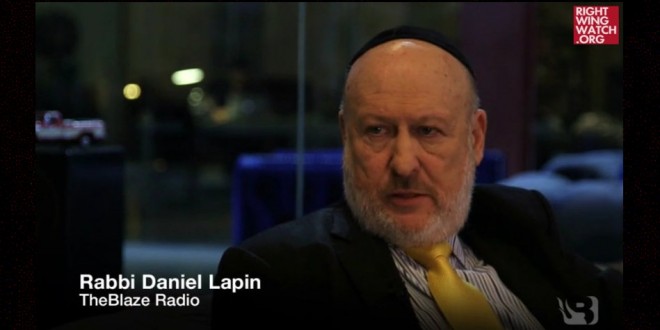 Glenn Beck Guest: Donald Trump Was Sent By God To Save America From “Sheer Evil” Of Hillary [VIDEO]

On his television program last night, Glenn Beck sat down with Rabbi Daniel Lapin to discuss Lapin’s contention that Donald Trump represents the only hope for saving America.

Beck, of course, has been a consistent and vocal critic of Trump and has repeatedly vowed never to vote for him, but Lapin did his best to sway Beck away from this position by bizarrely claiming that the Bible says that it is okay to behave unscrupulously when dealing with unscrupulous people.

Citing the passage from Genesis where Jacob meets Rachel, Lapin told some story that does not actually appear in the Bible but which he claimed gives believers permission to ignore their own moral principles when confronted with immoral situations.