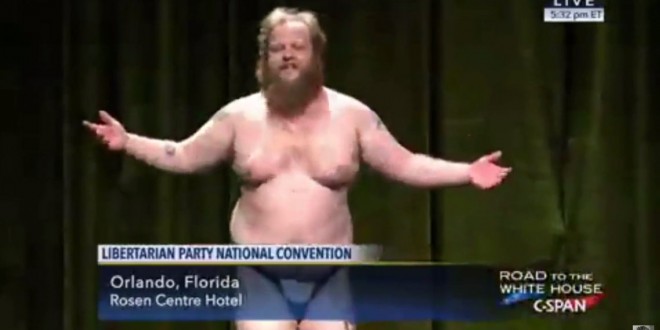 A candidate for chairman of the Libertarian Party stripped off his clothes on live TV before dropping out of the race at the party’s national convention Sunday in Orlando, Florida.

James Weeks — a self-described “liberty activist” from Michigan and a large, bearded man — was supporting the vice presidential campaign of Derrick Grayson when he said “I figured we could use a little bit of fun,” started leading the convention in clapping and began taking off his suit, shirt and tie while dancing, according to video of the convention broadcast by C-SPAN.

Cheers and claps soon gave way to coots, catcalls and boos. Weeks then said, “I’m sorry; that was a dare,” and said he was abandoning his own campaign for party chairman.

It wasn’t as though the convention wasn’t unusual enough. In a rarity in modern U.S. politics, the convention was contested and had to go to a second ballot before the Libertarians nominated former New Mexico Gov. Gary Johnson and former Massachusetts Gov. William Weld as its presidential ticket.

Previous John Oliver: How Is This Not A Thing? [VIDEO]
Next Bill Kristol: We Have An Independent Candidate