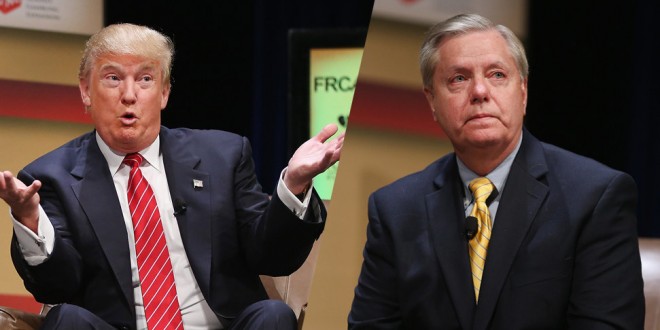 Sen. Lindsey Graham, one of Donald Trump’s most outspoken Republican critics, says he will not vote for either Trump or Hillary Clinton for president this year.
Graham says in a statement Friday he “cannot in good conscience support Donald Trump because I do not believe he is a reliable Republican conservative nor has he displayed the judgment and temperament to serve as Commander in Chief.” South Carolina’s senior senator also says he will join a growing list of veteran Republicans, including both Presidents Bush, Mitt Romney, John McCain and others, now declining to attend the party’s convention this summer in Cleveland, Ohio.

“He lost me when he said my friend John McCain was a loser because he was captured as a P.O.W. He lost me when he accused George W. Bush of lying to the American people about the Iraq War. And he thinks Putin’s a good guy,” Graham said. “So I just can’t go there. I respect people who can. And to Donald Trump, congratulations, you did a hell of a thing. You beat me and everybody else. I just really believe that the Republican party has been conned here. I’ve got a hard time supporting somebody for president who spent thousands of dollars of their own money trying to find out if President Obama was born in Kenya versus Hawaii. I think that’s crazy. I’m just glad we’re having the convention in Cleveland, not Area 51,” he said. “I think Donald Trump is going to places where very few people have gone and I’m not going with him.”

Trump could not resist hitting back:

I fully understand why Lindsey Graham cannot support me. If I got beaten as badly as I beat him, and all the other candidates he endorsed, I would not be able to give my support either. Every time I see Lindsey Graham spew hate during interviews I ask why the media never questions how I single handily destroyed his hapless run for President. As a candidate who did not receive 1% in his own state – compared to my victory at nearly 40% with many others in the race – he has zero credibility.

RELATED: And this just in from Jeb Bush.

The American Presidency is an office that goes beyond just politics. It requires of its occupant great fortitude and humility and the temperament and strong character to deal with the unexpected challenges that will inevitably impact our nation in the next four years.

Donald Trump has not demonstrated that temperament or strength of character. He has not displayed a respect for the Constitution. And, he is not a consistent conservative. These are all reasons why I cannot support his candidacy.

Hillary Clinton has proven to be an untrustworthy liberal politician who, if elected, would present a third term of the disastrous foreign and economic policy agenda of Barack Obama.

In November, I will not vote for Donald Trump or Hillary Clinton, but I will support principled conservatives at the state and federal levels, just as I have done my entire life. For Republicans, there is no greater priority than ensuring we keep control of both chambers of Congress. I look forward to working hard for great conservatives in the Senate and House in the coming months.