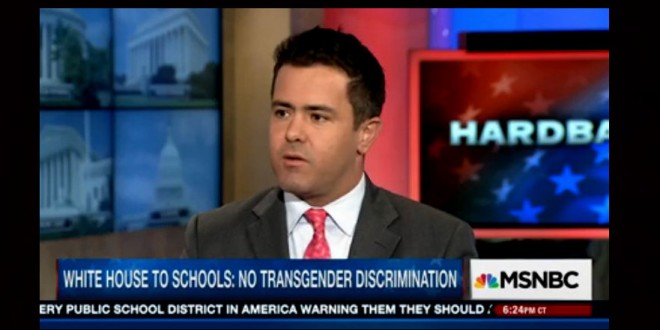 Last night Family Research Council hater Travis Weber appeared on MSNBC’s Hardball, where he flailed and failed to answer when host Chris Matthews repeatedly asked him which bathroom trans activist Jennifer Boylan should use. Media Matters has the transcript:

CHRIS MATTHEWS (HOST): Travis, tell Jenny what bathroom she should use.

MATTHEWS: Which one should she use?

WEBER: I think people should be —

WEBER: I think we can do things the way we’ve done them for decades, and people could use bathrooms according to biological sex with specific accommodation made for people who have a genuine issue. If we look at the North Carolina law, it made an accommodation. People are not happy with that, however. And now the Obama administration —

MATTHEWS: Let’s just talk about transgender people. What should a transgender person who identifies as a woman do? What bathroom should they go to? Just keep it simple.

MATTHEWS: See no, you can’t answer the question, can you? What should they do?

WEBER: They can use the bathroom of their biological sex, except when there’s a genuine issue and an accommodation can be made.

Boylan is a regular on I Am Cait and she states her case quite eloquently.