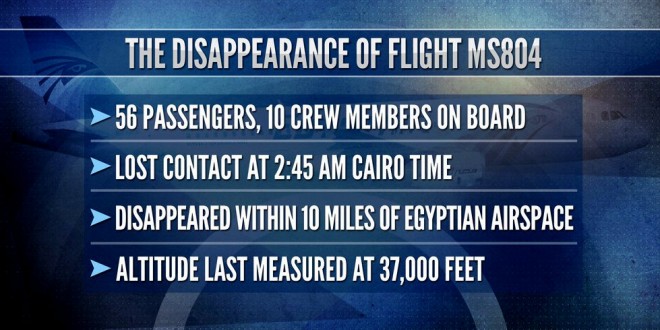 EgyptAir Flight 804 vanished from radar on its way from Paris to Cairo with 66 people aboard, the airline said Thursday. The plane was flying at 37,000 feet when it lost contact overnight above the Mediterranean Sea, the airline tweeted. Although investigators are still trying to figure out what happened, French President Francois Hollande said he had been told the flight crashed. Somber relatives gathered in Cairo and Paris airports, seeking word on their loved ones. They were ferried to special centers at both airports, where translators and psychiatric support awaited.

Greek controllers tried to reach EgyptAir Flight 804 about 10 miles before it left the country’s airspace and for about 90 seconds after and received no response, the head of Greek Civil Aviation told Greek broadcaster ANT1 TV. The last time controllers were able to reach the aircraft, it was flying near the Greek island of Kea at 37,000 feet at an air speed of 519 mph with no problems reported, the official told the news agency. Passengers and crew were from France, Egypt, Britain, Belgium, Iraq, Kuwait, Saudi Arabia, Sudan, Chad, Portugal, Algeria and Canada. A majority were French and Egyptian — 15 and 30 people respectively, the airline said in a statement.