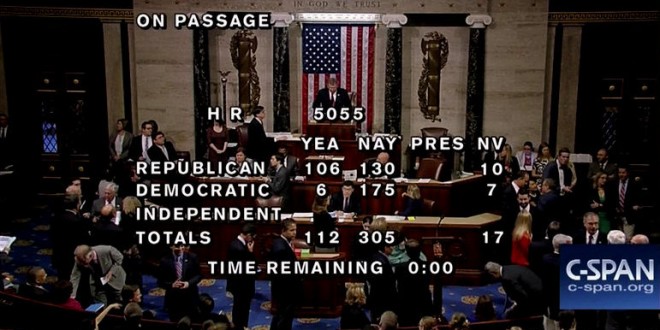 Last night openly gay US Rep. Sean Patrick Maloney finally succeeded in pushing through an amendment that would put President Obama’s executive order on federal contractors into law. Today Maloney and his fellow Democrats vowed against the underlying spending bill. The Hill explains:

Most Democrats voted against the bill due to its spending levels and policy riders. Taken together with Republicans who opposed the LGBT measure, the legislation didn’t have enough votes to pass Thursday.

It failed 112-305, with 130 Republicans — more than half of the House GOP caucus — joining all but six Democrats to sink the Energy Department spending bill.

House GOP leaders could still try to bring spending bills to the floor. But they may start considering them under a more limited process that prevents lawmakers in either party from offering unlimited amendments.

Asked whether the House can pass more spending bills this year, Appropriations Committee Chairman Hal Rogers (R-Ky.) said, “I think so, yeah,” adding that ending the open amendment process would “be considered.” “We’ll adapt to the circumstances and move on,” he said.

The bill’s failure Thursday marks the second time in two weeks lawmakers have waged a very public fight on the House floor over protections for lesbian, gay, bisexual and transgender people.