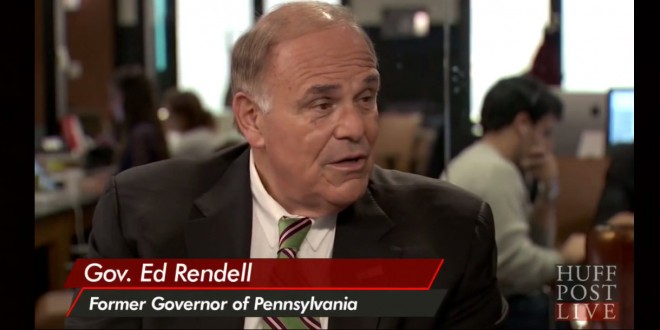 The chair of this summer’s Democratic National Convention said that supporters of candidate Bernie Sanders have to “behave themselves” when the Vermont senator loses the nomination. During a radio interview with John Catsimatidis, Ed Rendell, a former Pennsylvania governor and Democratic National Committee chairman, laid out his vision for how the convention would play out.

“I think it’s gonna be a great convention, but of course the key to it is the Sanders people — Bernie’s gonna have his name placed in nomination, we’re gonna have a roll call, there’s gonna be a demonstration in support of Bernie, he’s gonna lose the roll call,” he said. “His supporters have to behave and not cause trouble. And I think they will and I think Sen. Sanders will send them a strong message.”

Rendell endorsed Clinton back in January.

Previous The Church Lady Returns To SNL [VIDEO]
Next Sarah Palin: Speaker Paul Ryan’s Career Is Now Over Because He’s Not Yet Endorsed Donald Trump [VIDEO]