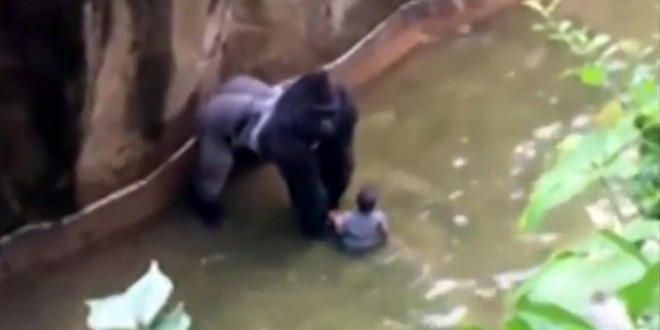 A holiday weekend outing at Cincinnati’s zoo turned doubly tragic Saturday when a 4-year-old boy was hospitalized after falling into a gorilla enclosure – and zoo workers had to kill the rare gorilla to protect the boy.

Cincinnati police and emergency crews responded to a report of a child falling into the exhibit at the Cincinnati Zoo & Botanical Garden at about 4 p.m. Saturday. Police confirmed the child was taken to Cincinnati Children’s Hospital Medical Center near the zoo, and was treated for serious injuries that were not considered to be life-threatening.

Cincinnati Zoo President Thane Maynard said the boy crawled through a barrier and fell an estimated 10 to 12 feet into the moat surrounding the habitat. He said the boy was not seriously injured by the fall.

The Cincinnati Fire Department reported in a press release that first responders “witnessed a gorilla who was violently dragging and throwing the child.”

A spokesman for the zoo told reporters that a tranquilizer dart would likely have been slow-acting considering the gorilla’s “agitated state.”