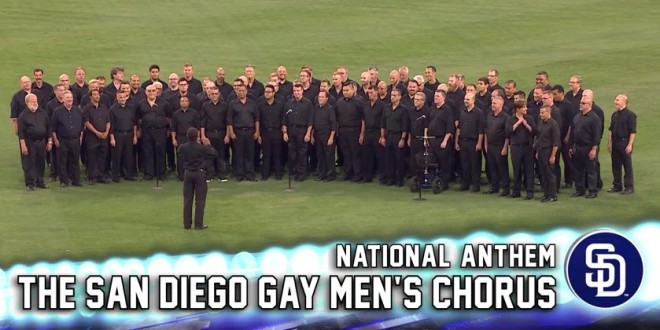 From the Facebook page of the San Diego Gay Men’s Chorus:

What should have been a night of joy and celebration at Petco Park last night, instead turned into a nightmare raising serious questions about homophobia within the San Diego Padres organization and its relationship with the LGBT community.

No attempt was made to stop the recording and start over. No announcement of apology was made to the singers or their friends and families in the stands. No attempt to correct the situation occurred other than to force the 100 men to stand in the spotlight of center field for the song’s duration and then be escorted off the field to the heckles of baseball fans shouting homophobic taunts including “You sing like a girl.”

This incident followed several days of troubling comments and behavior within the San Diego Padres organization. Three days before the game, San Diego Padres representatives aggressively sought to prevent singers from performing the National Anthem unless they purchased a ticket to the game—even if they did not plan to stay for the game—which was not part of any previous discussion or written or verbal agreement and would have cost the small, community-based non-profit thousands of dollars. The demand eventually was rescinded on Friday following repeated complaints made by SDGMC and San Diego Pride to San Diego Padres management.

With this as background, we call on the San Diego Padres and Major League Baseball to immediately launch a full and transparent investigation into the incident to determine if someone or some people intentionally engaged in anti-gay discrimination or a hate crime by playing a female’s voice to represent a group of gay men with the purpose of denigrating and/or ridiculing gay men. The historic significance of such an act is not lost on the LGBT community—especially in relation to professional sports—and added to the depth of embarrassment experienced by the singers and their families.

We applaud San Diego Padres President and Chief Executive Office Mike Dee for reaching out to our organization to apologize and to offer to meet with LGBT leaders to discuss the incident. We look forward to this meeting. We believe it is important to work together with the San Diego Padres organization to build bridges within the LGBT community rather than burn them down as happened last night.

However, we are very disappointed with the San Diego Padres dismissively brief two sentence statement at 9:37 p.m. on Saturday, May 21, 2016 which did not appropriately address the gravity of the situation nor pay due to the 100 volunteers who took to the field in celebration and were led off in humiliation.

VIDEO: The San Diego chorus performed for the Padres in 2015.