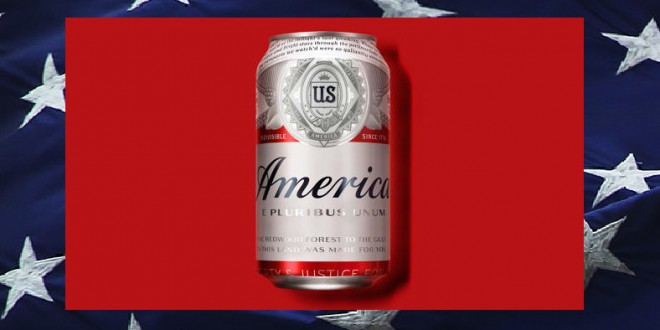 Budweiser Rebrands As “America” Until Election

Nothing says ‘America’ like an ice-cold can of mass-produced beer. Anheuser-Busch announced Tuesday that the company is replacing the Budweiser logo with “America” on its 12-oz. cans and bottles this summer.

The cans of patriotic nectar will be available May 23 through the November election and aim “to inspire drinkers to celebrate America and Budweiser’s shared values of freedom and authenticity.”

The company is no stranger to American-themed summer cans, which have been transformed into American flags and featured the Statue of Liberty in the past. This year, the cans and bottles will try to stir American pride with lines from the Pledge of Allegiance and lyrics from The Star Spangled Banner and America the Beautiful.

Apparently, the Belgium-based megabrewer, which owns more than 200 brands globally, including Corona and Stella Artois, knows the way straight to our checkbooks. Throw some America on it!