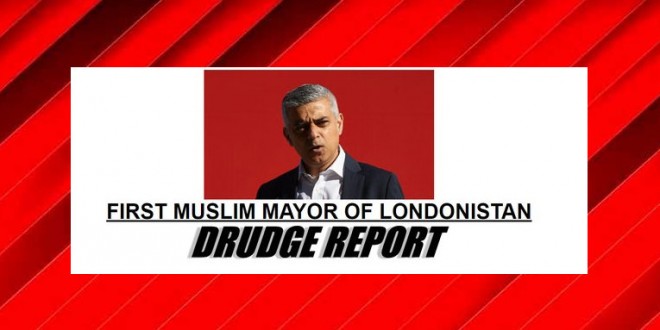 The British press has just declared Sadiq Khan the winner in yesterday’s mayoral election in London. Above is Matt Drudge’s reaction and similar doomsday shrieking can, of course, be found at Breitbart. From the Guardian:

Sadiq Khan is comfortably ahead of his rival Zac Goldsmith in the race for the London mayoralty after the majority of first-preference votes had been counted on Friday. The 45-year-old MP for Tooting was expected to reclaim City Hall for Labour after eight years of Conservative rule, and at the end of an often bitter campaign during which the Conservatives accused Khan of “pandering to extremists”.

With all first-preference votes counted, Khan was on 46%, nine points ahead of Goldsmith. It appeared mathematically impossible that Goldsmith could catch him on second-preference votes. |”Sadiq has won without question,” said Peter Kellner, the former chairman of the market research firm YouGov, as he watched the results come in at City Hall. “He is well ahead on the first count and that’s not going to change radically.” Kellner said Khan appeared to be on course for at least a 12-point victory after second-preference votes were counted.

Khan is actually a fairly standard member of the Labour Party. He’s kept the party’s leftist leader, Jeremy Corbyn, at arm’s length. His opponent, Zac Goldsmith, had developed a reputation as something of a maverick Tory, a passionate environmentalist who often caused trouble for his party leadership. So it surprised just about everyone when Goldsmith and his party began openly painting Khan as a friend of Islamic fundamentalists and tried to turn London’s non-Muslim Asian communities against him.

In one attack, Goldsmith, along with Prime Minister David Cameron, condemned Khan for sharing a platform with Suliman Gani, an imam in Khan’s constituency who Cameron claimed “supports” ISIS. It turned out that Gani supports the Tories and has met with many Conservative politicians, including Goldsmith, but no matter. Cameron escalated his feverish attacks on Khan week after week. Goldsmith also sent leaflets to Tamil and Hindu communities, warning them that Khan would tax their jewelry and other family possessions. Many who received these letters reacted to them with revulsion.

In perhaps the culmination of his smear campaign, Goldsmith wrote a piece for the Daily Mail attacking Khan’s abilities to defend the city’s safety. “If Labour wins on Thursday, we will have handed control of the Met, and with it control over national counter-terrorism policy, to a party whose candidate and current leadership have, whether intentionally or not, repeatedly legitimised those with extremist views,” he wrote. The Mail helpfully included a picture of the 7/7 terrorist attacks along with the article.