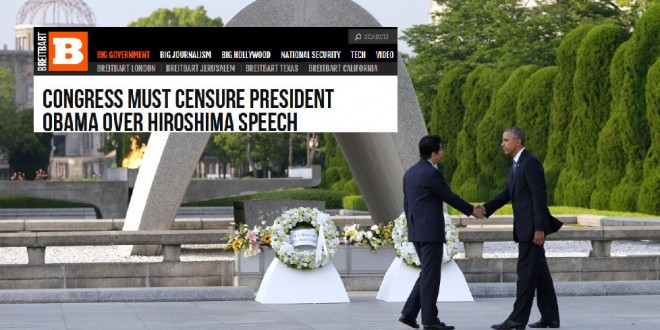 Breitbart Wails: Congress Should Censure President Obama For His “Apology” Speech In Hiroshima

President Barack Obama told the world on Friday in Hiroshima that the American decision to drop nuclear bombs on Japan in 1945 arose from humanity’s worst instincts, including “nationalist fervor or religious zeal.”

The war that ended in Hiroshima and Nagasaki, he said, “grew out of the same base instinct for domination or conquest that had caused conflicts among the simplest tribes, an old pattern amplified by new capabilities and without new constraints.”

The speech — delivered on the eve of Memorial Day weekend — was billed by the White House as anything but an apology, but Obama’s words betrayed his true sentiments.

The U.S. Congress declared war on Japan the day after Pearl Harbor. Millions of Americans fought to save the country, and civilization. Hundreds of thousands died, often in brutal hand-to-hand combat against a fanatically determined Japanese enemy.

It is the inescapable duty of the Congress of the United States today to censure President Barack Obama for casting doubt on the sacrifices and motivations of the Americans who fought the Second World War — on the eve of Memorial Day, no less.

As you’ve probably already concluded, Pollak is wildly distorting the president’s comments, which were about the nationalism the spawned WWII in the first place.