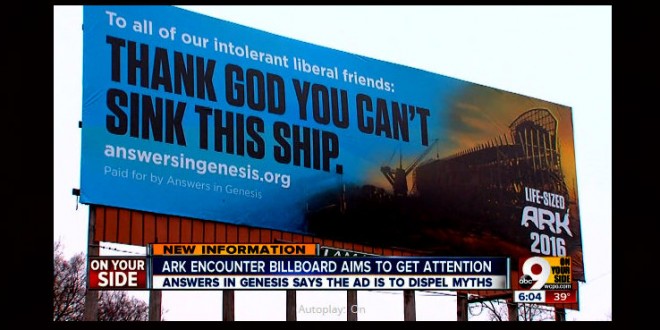 Two billboard companies have refused to display an advertisement by a group protesting the Ark Encounter amusement park in Kentucky. Tri-State Freethinkers president Jim Helton tells news outlets the group recently raised $10,000 for a billboard. The proposed design depicts Noah’s Ark with people drowning around it and the words, “Genocide and Incest Park: Celebrating 2,000 years of myths.”

The advertisement has been turned down by billboard companies Lamar and Event Advertising and Promotions LLC. Helton says the group is considering erecting the billboard outside of Kentucky, if it can find a taker. In March, Answers in Genesis President Ken Ham called the billboard campaign an attack on Christianity.

With our future Ark billboards, we will instead have a positive message to share about our family attraction coming to Williamstown. Freethinkers and other skeptics are very welcome to visit, and we are hopeful they will be open minded enough to want to learn more about an account in the Bible that is often censored in the public arena by anti-freethinking activists…

We will be promoting all the major tourist attractions in the region even though we may not necessarily agree with everything stated at each place. I call on the Freethinkers to support all tourist facilities and help the economy of Kentucky.

Previous Dan Quayle Endorses Trump [VIDEO]
Next American Family Association Head Tim Wildmon: We Met With Target Officials And They Told Us To Get Lost